Home »Uganda»When the cat is away, the mice will play 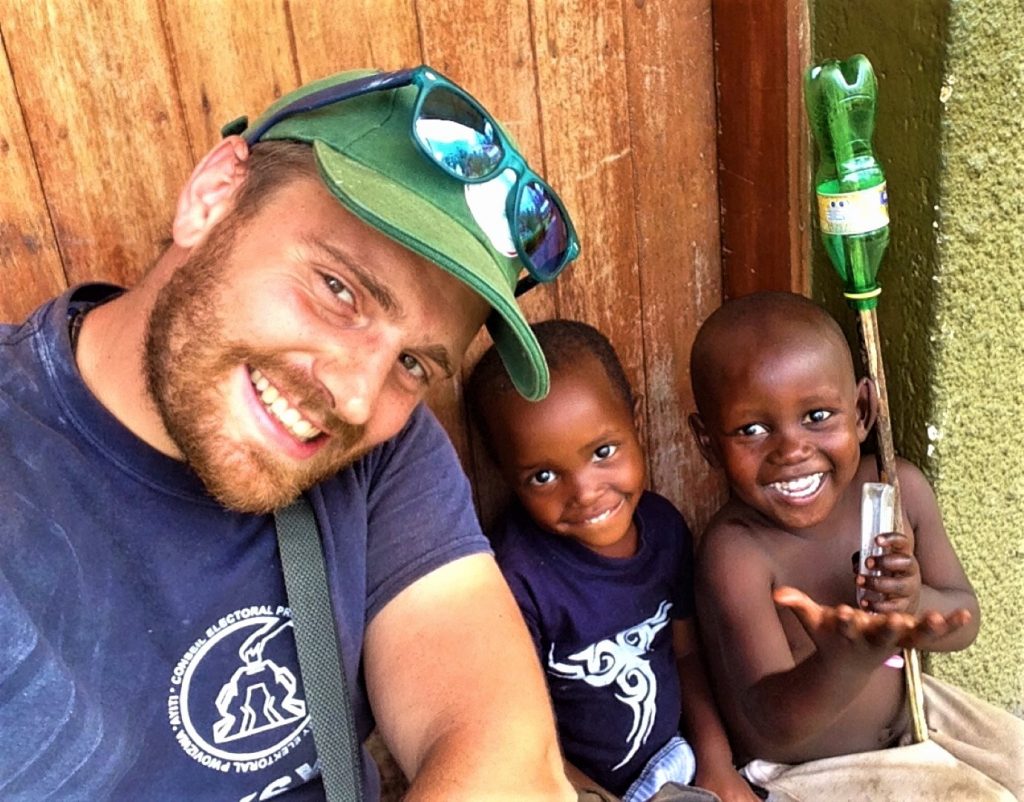 Coming back to Uganda meeting my little friends

As I already mentioned in my last post from Tanzania, I was traveling back to Uganda to finalize the school kitchen and catering school project. 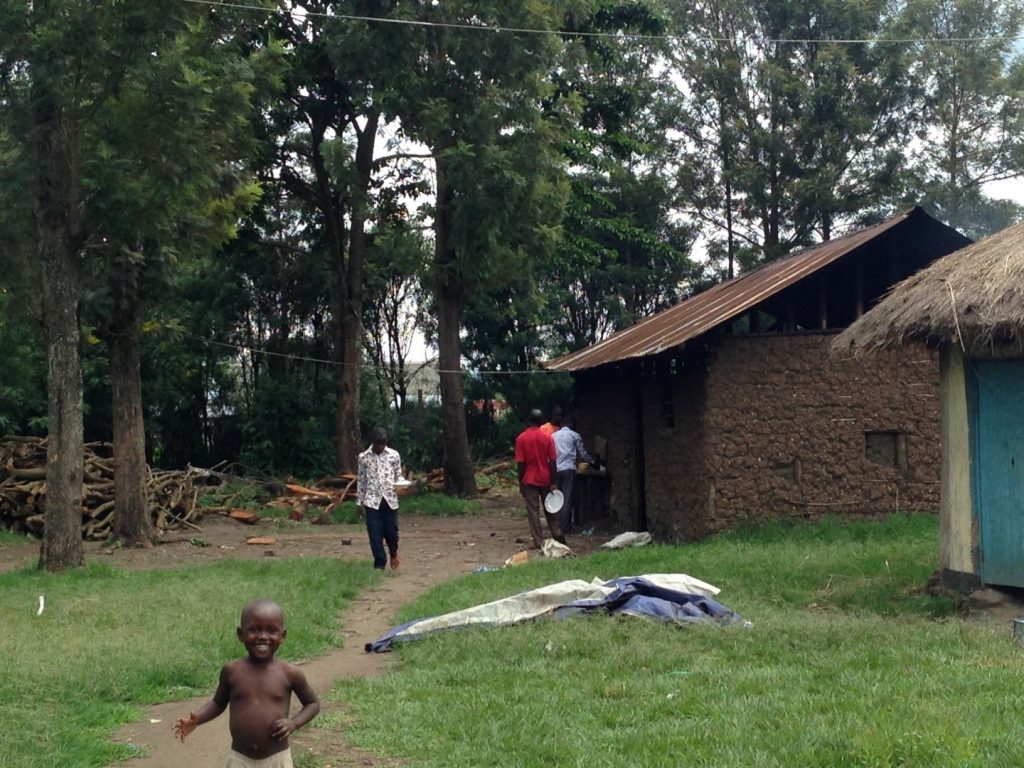 The old kitchen of the HolyDoveSchool

Starting from Tanzania Mufindi Saturday morning, I arrived in Entebbe monday noon. One of the main reasons I went to Tanzania, was the long processing time for my special stainless steel saucepands I ordered from Kampala. So I told my driver after landing, I won’t leave Kampala without seeing these saucepans. I wanted to make sure that they are according to my requirements before they send them to us. It took us 3h from the airport through the “little” traffic of Kampala to that company. When we arrived there, the indian engineer told me that I’m not allowed to enter the production area. “Internal rules”. But he will request pictures to show me. I became a kind of mad with him. He promised me these pictures already 5 days before but didn’t send anything. Now I was sitting in his company and he shows me just pictures. 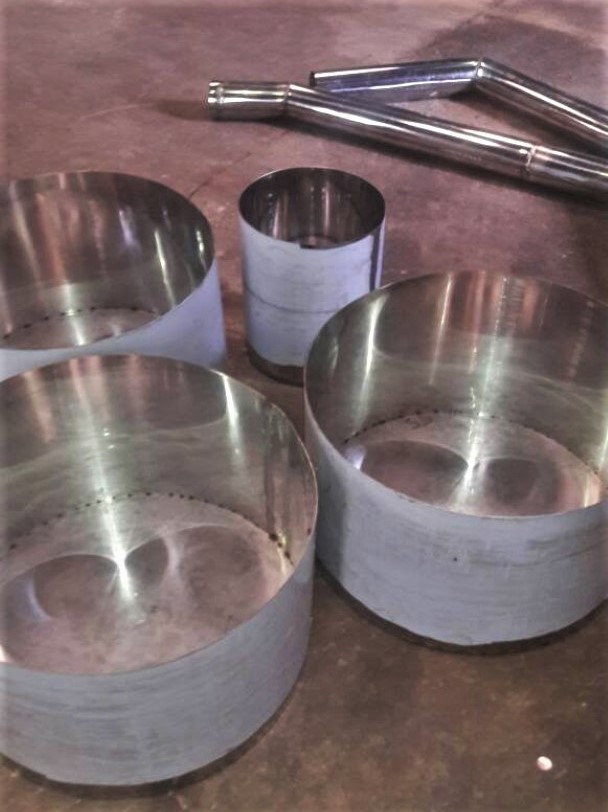 The unfinished saucepans and chimneys

We left that company at 4.30pm to make our way to Kasese. That is a 400km ride on roads which are not comparable to the European or american standards. We finally arrived at 11pm in Kasese. Father Modest was waiting there for me in order to bring me to the Parish house 35km further. I arrived here short after midnight. The two cooker girls and 2 dogs warmly welcome me and were happy to see me again. I was so tired after all this, that I fell asleep while falling into my bed.

The next day we started slowly. I requested a small lorry in order to transport the unfired bricks to the 15km distanced school. I repeatedly said the guys which were loading the bricks, that they have to be careful with my bricks. They ignored everything I said. And again I had to become a bit mad. It simply would have taken me too much time to reproduce these bricks if they would damage too many of them. After this announcement they finally carried the bricks like raw eggs and almost none of them were damaged.

Transport of the bricks

After this transport we went back to Kasese for a small shopping tour. Men shopping 🙂 Tools and materials for the next days of construction. I love to go from shop to shop bargaining for the prices and look for the best materials. It took us again more time than expected so that we arrived at 9pm at the school. I wanted to see the progresses they made while I was gone. But my expectations were bitterly disappointed. 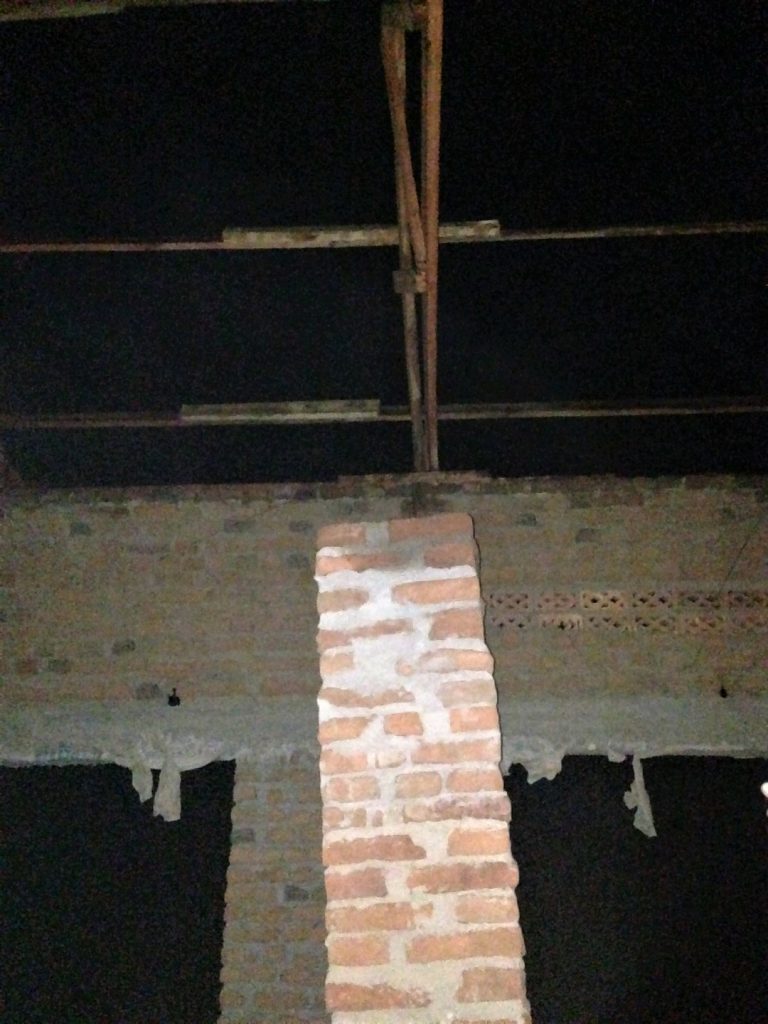 The skew chimney and the rafter above

The chimney was not finished over the rooftop as I requested and it was completely skew. Additionally they placed the rafter of the roof exactly above the chimney. That was all I could see in the darkness. So I went home a bit disappointed awaiting what the next day will bring.

I went back to the school early in the morning to inspect the rest of the kitchen building. When I approached the building I was shocked again. They promised me to build the rooftop just 1.5m higher than the walls. It became 2.5m higher. They also didn’t construct my special requested roof, so that the wind can take out the water steam. That will be another 50cm. All this means that I will have to construct a chimney taller than 9.5m to be higher than the rooftop. Very high construction. 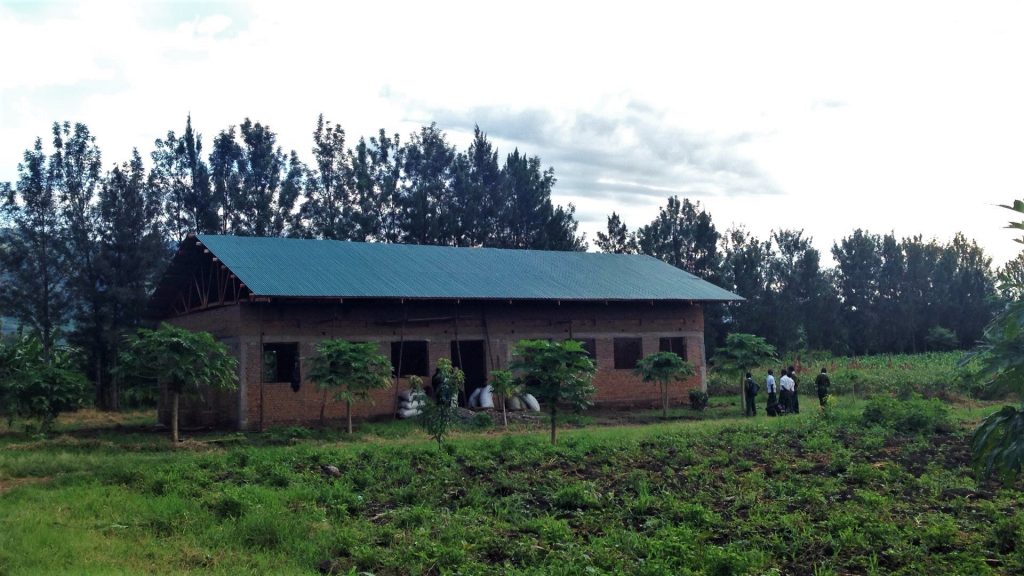 Massive building for a kitchen 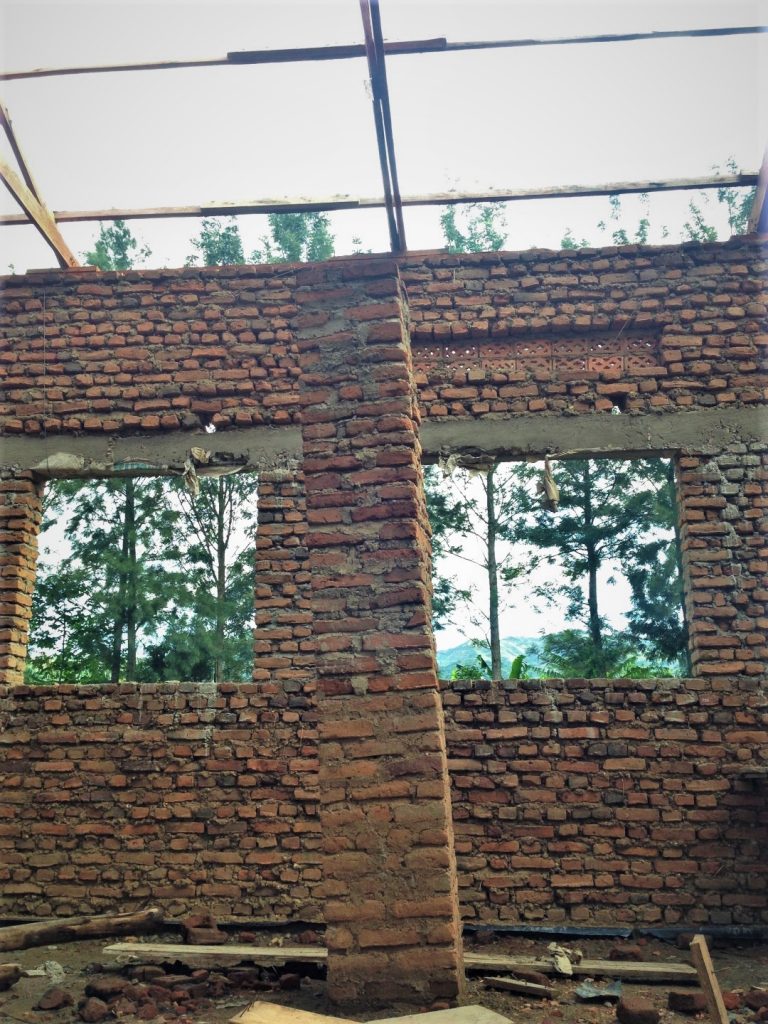 Not the best chimney 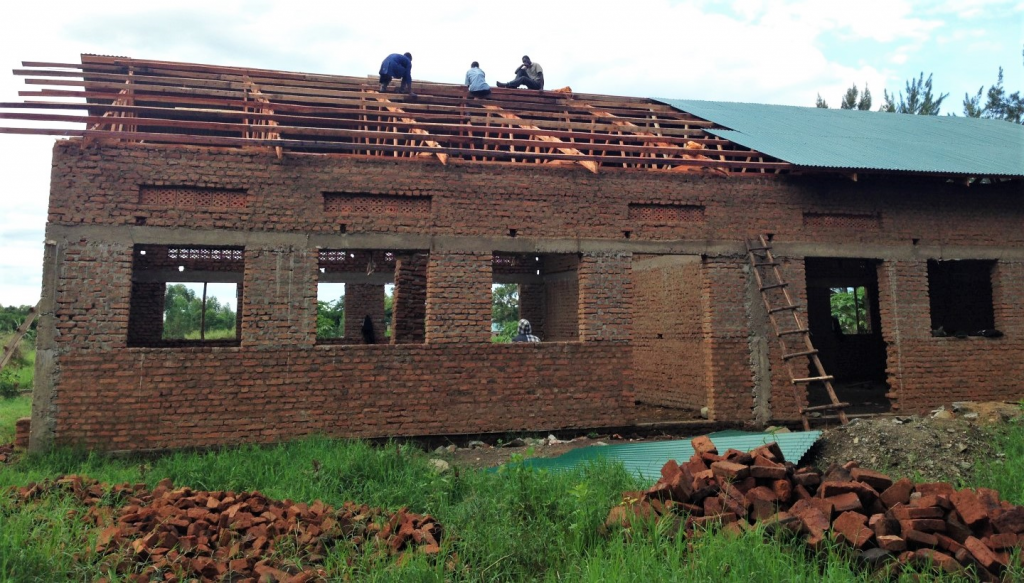 Unfinished roof without a steam vent

So we started to remove the chimney to set a cement foundation where we can construct on.

The same time we started to shift the special clay bricks which are mixed with a high amount of sawdust. The saw dust already formed a porous clay which is supposed to isolate the heat. 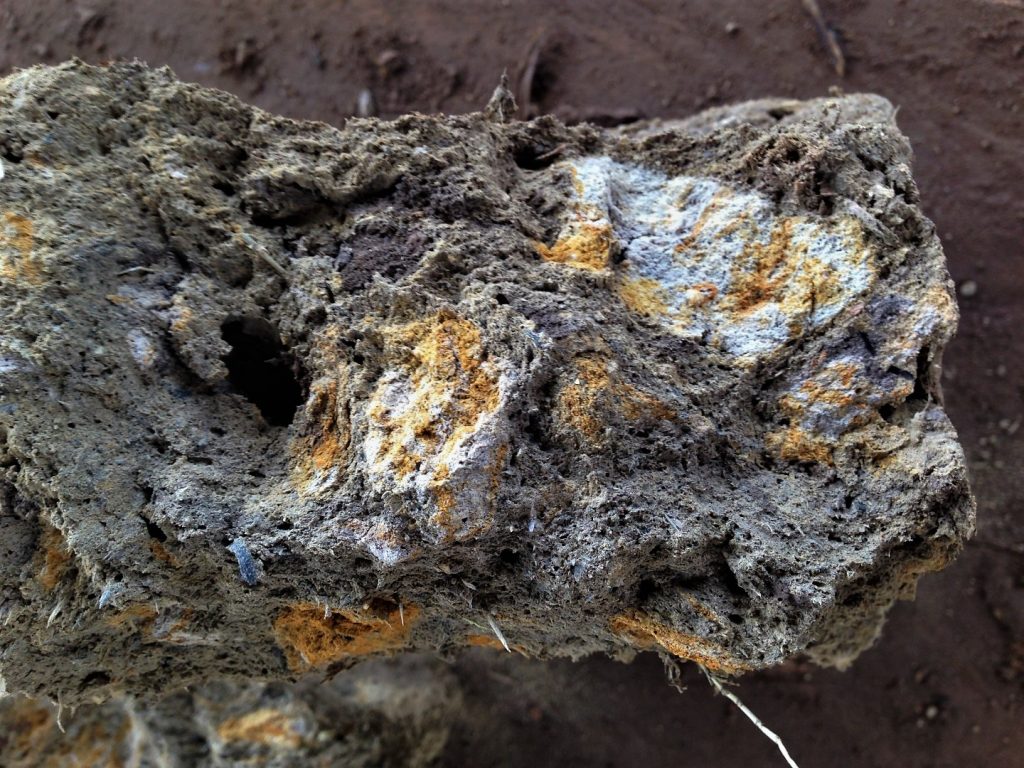 I have never done this type of burning, but I knew that we have to shift them, build a wall around and fill everything with husks. 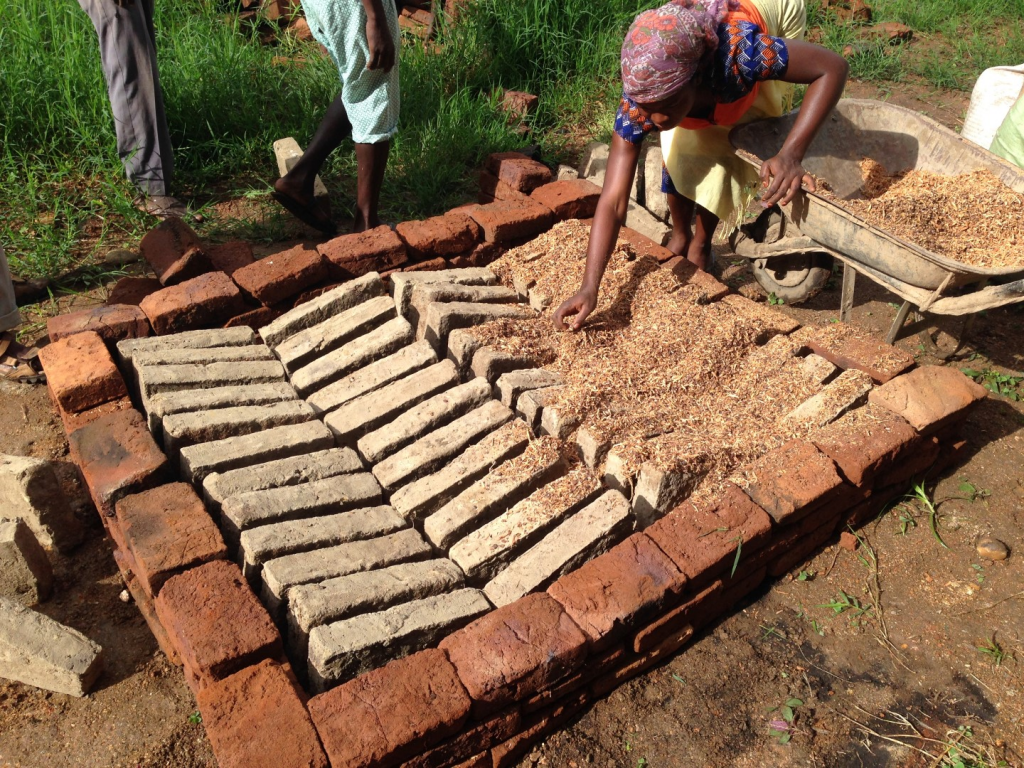 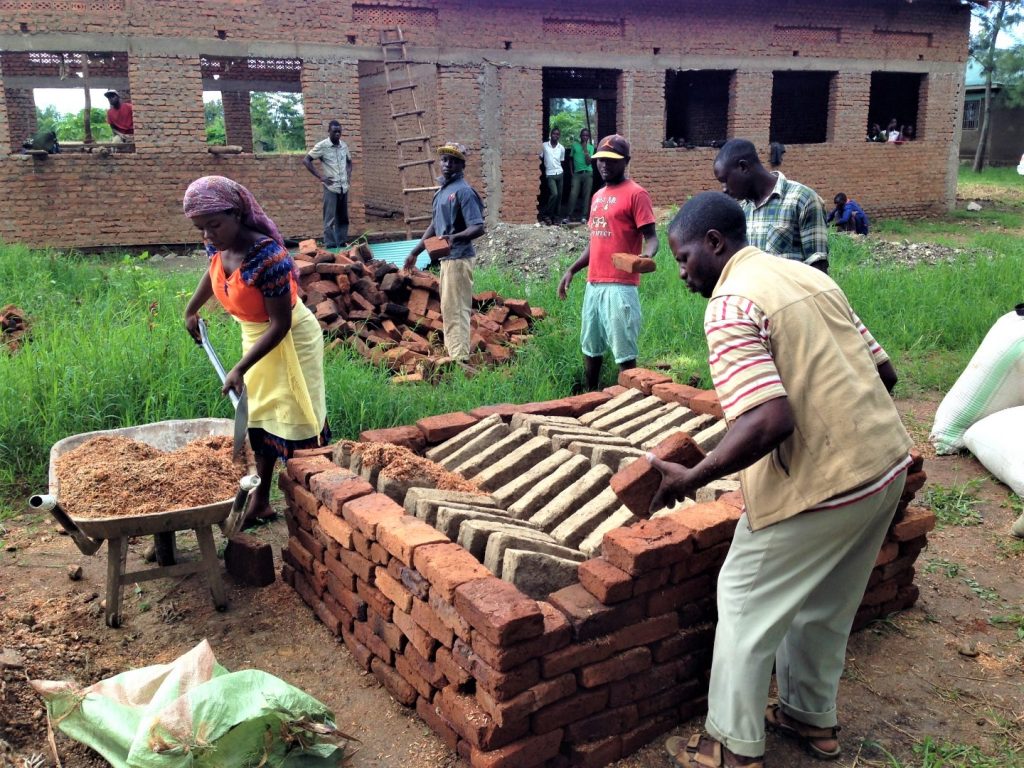 Layer by layer shifting and filling 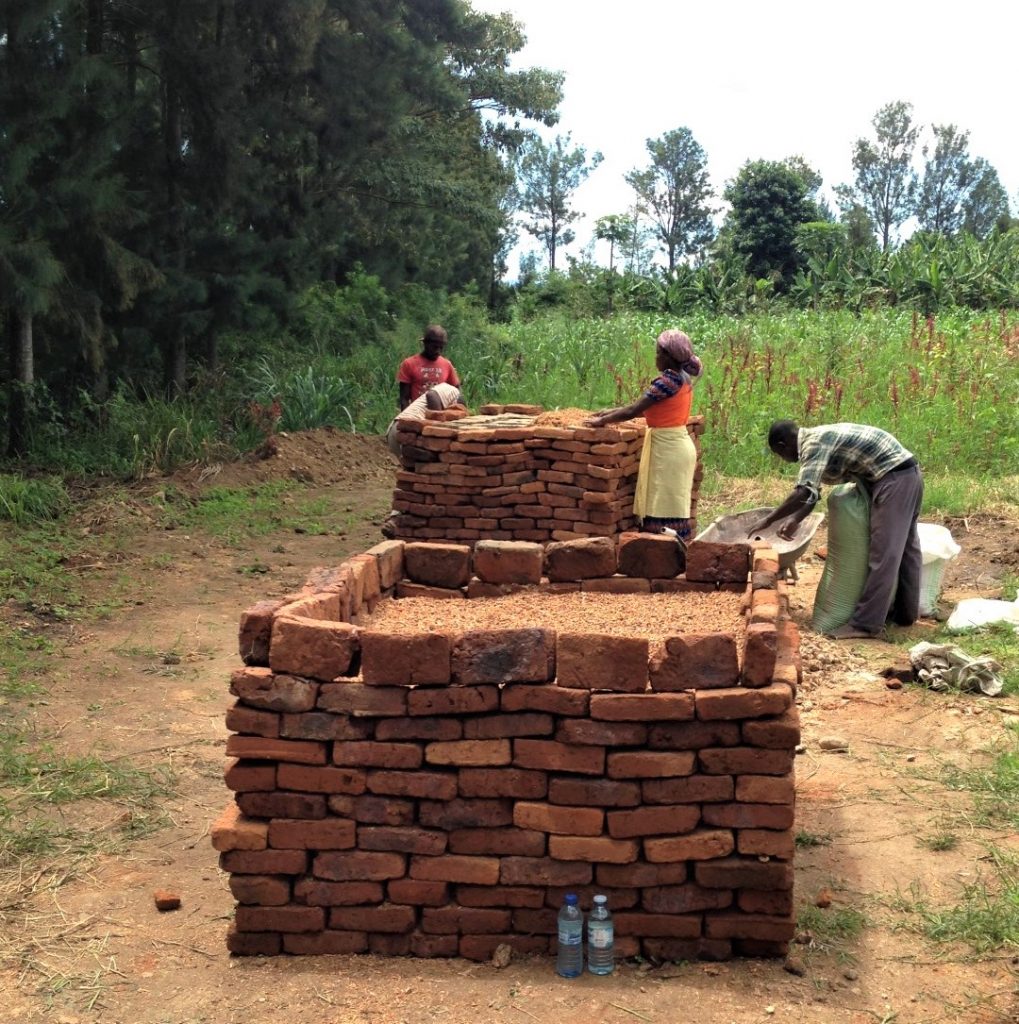 We used coffee husks for this. So after 3h shifting, we put some fuel on top in order to light the fire up. Aaaaaaaaaand nothing happened. So we placed some burning charcoal. It started to burn very very slowly. 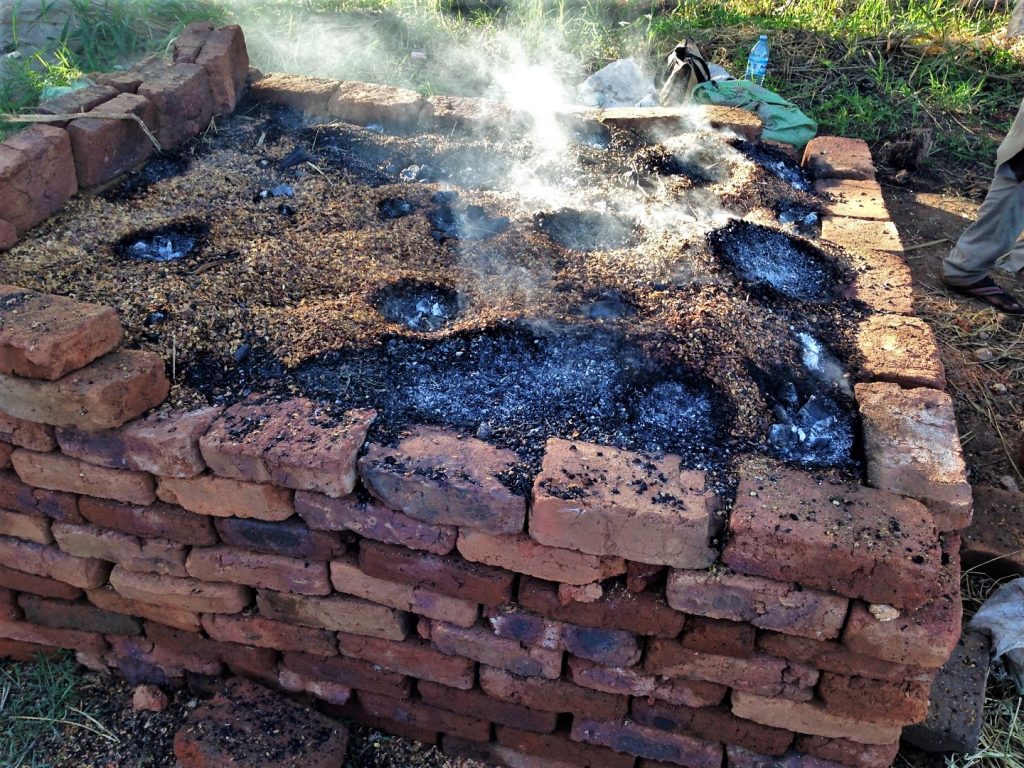 Ignition with charcoal in local spots

So more then 10 people were standing around these firing place winding up fresh air into the husks. It didn’t really work so well. So we decided to keep it burning and wait until the next morning. In the evening I had the chance to research a bit about the burning technology. I figured out what I mad wrong.

Starting to fill upThe next morning the fire was still burning a bit but not enough. So we decided to rearrange everything. It took us another 6h to to do that. In the end we filled u the husks till we have a small hill and light up the tip. It is burning very slowly but hot. The process requires to burn for 3 days. 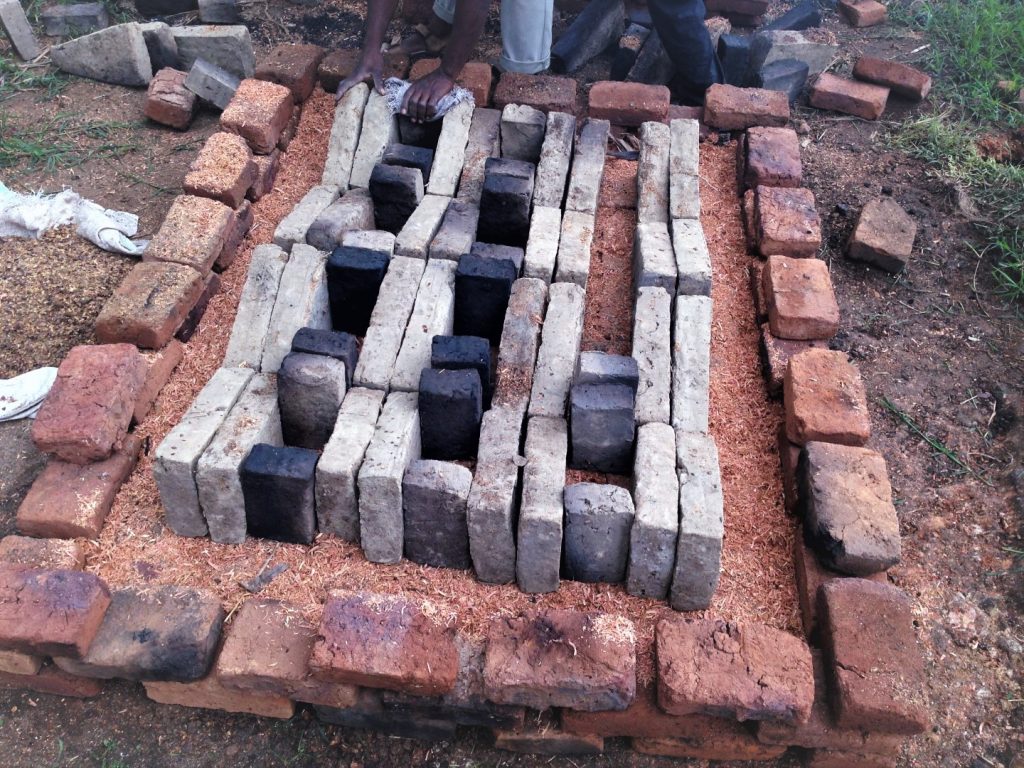 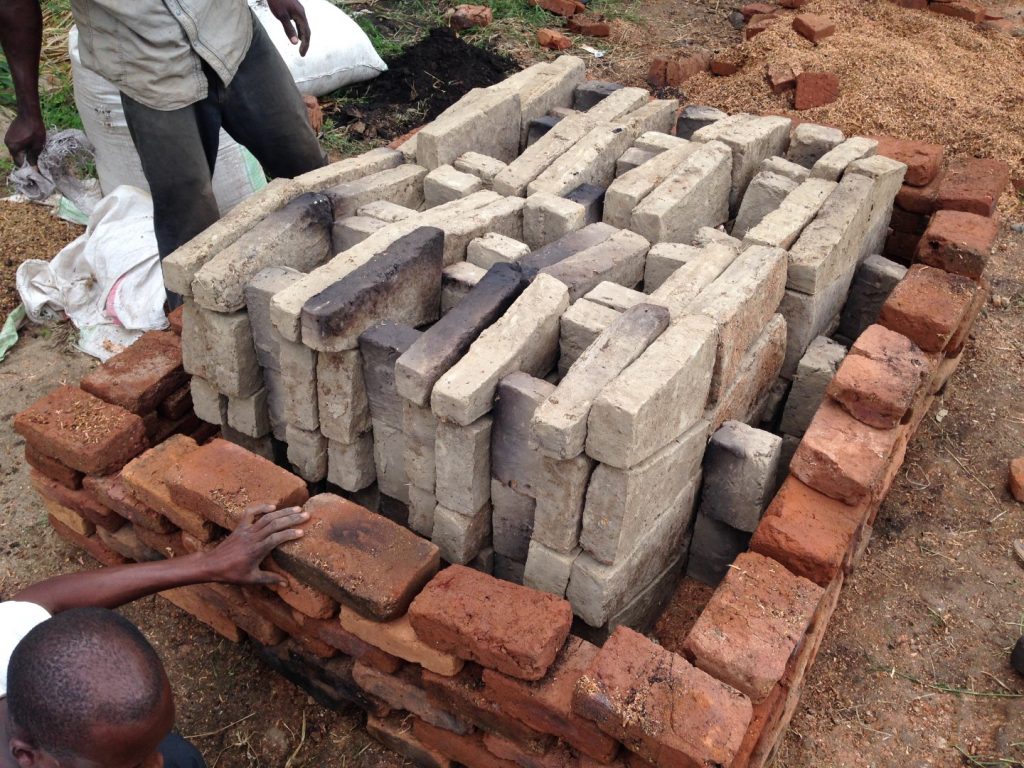 Keeping more space to the wall and chimneys in between 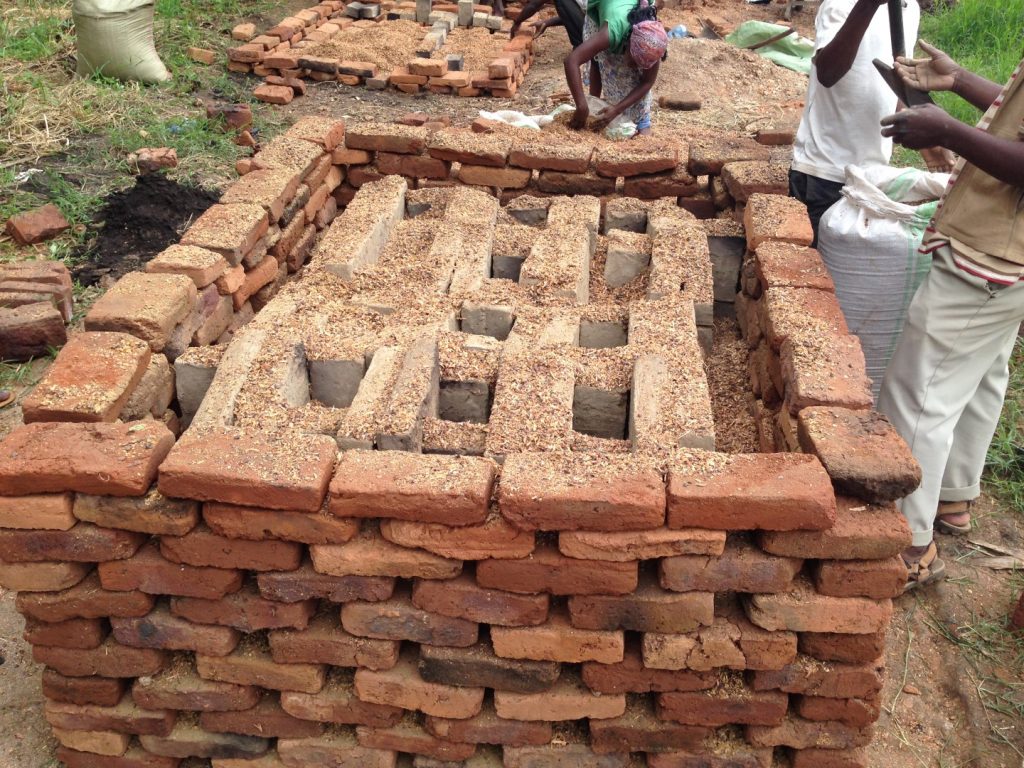 Starting to fill up with husks 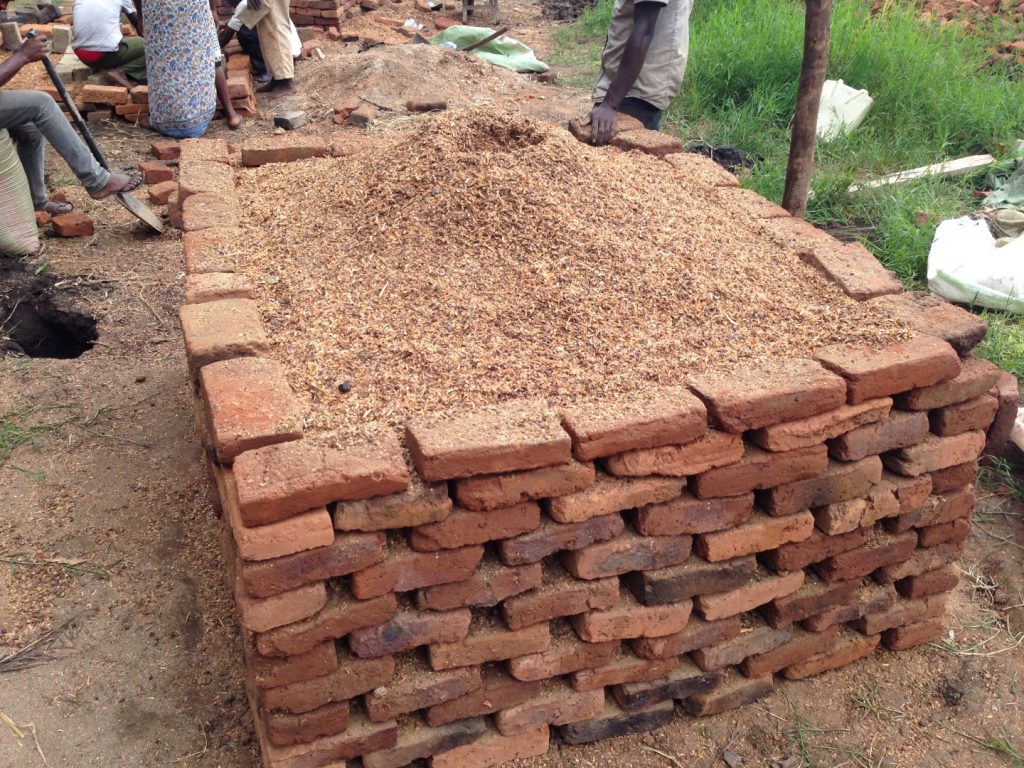 The afternoon we used to form our big blocks which are constructed inside the stove and used to hold the big saucepans. They are made by fireproof cement. The big mass of the blocks made it very difficult to form them straight and all the same sizes. We needed several tries but none of the were according to the requests. Till one of my workers disappeared with the form. Half an hour later he came back with a form to disassemble. It made it much easier. It is still tricky but possible. 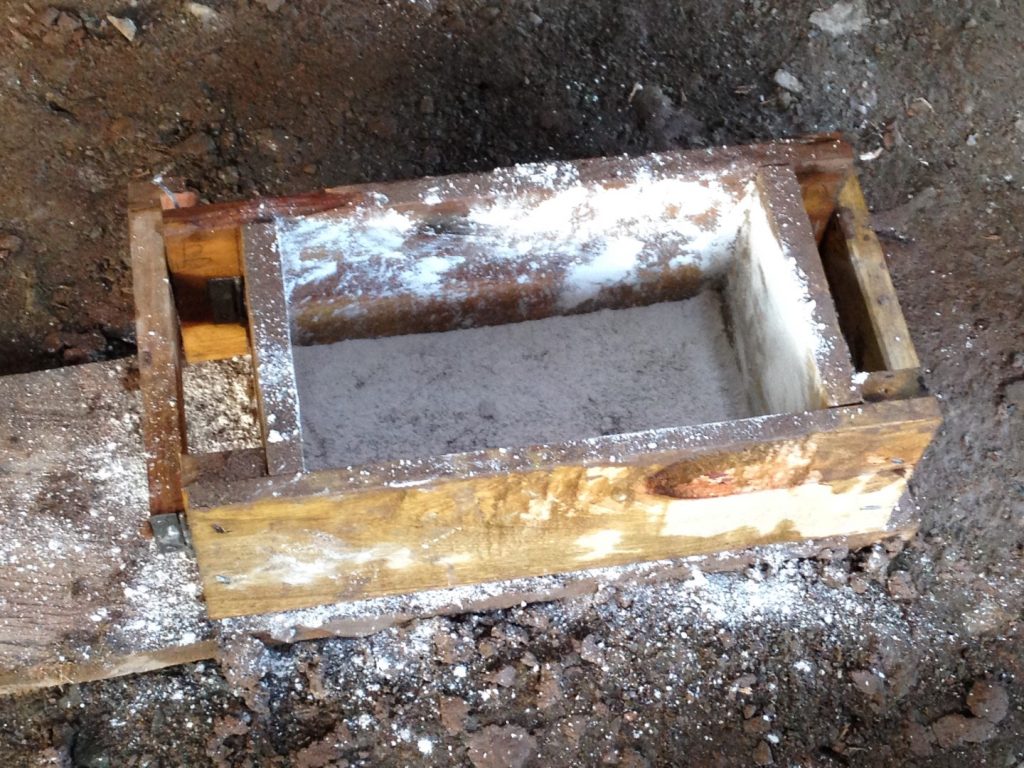 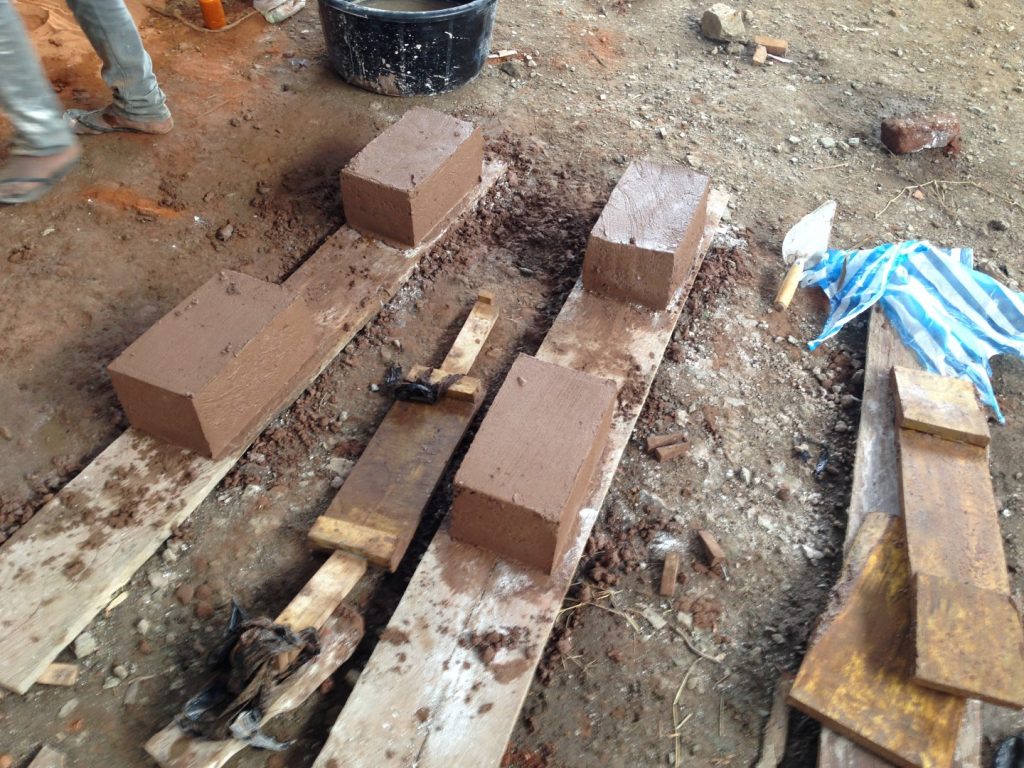 While we were doing all this, we two of the guys went on to build up the chimney. We reached now 3m and will interrupt till we finish all our stoves.

Today we build the foundations for the big stoves. We reused some of the old bricks and filled it with fireproof cement as well. Additionally we could do all preparations for our stove seminar tomorrow. We invited 20 people in order to show them how to construct the small family stoves. During this seminar we will build 7 of these stoves. 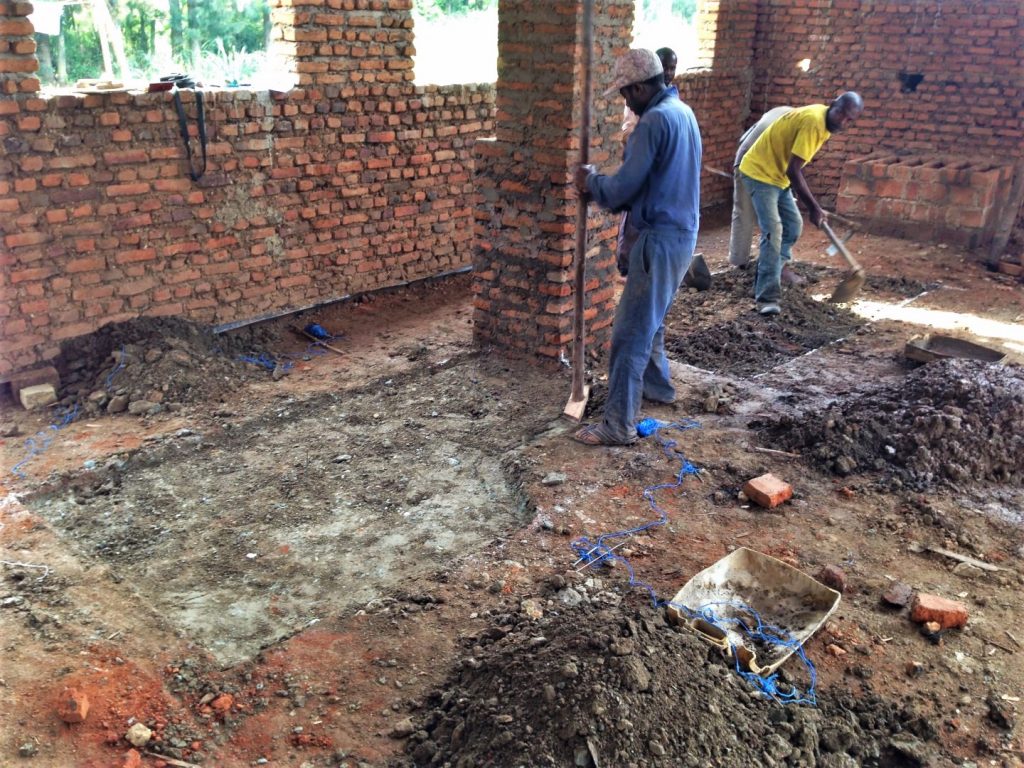 Filled up with bricks 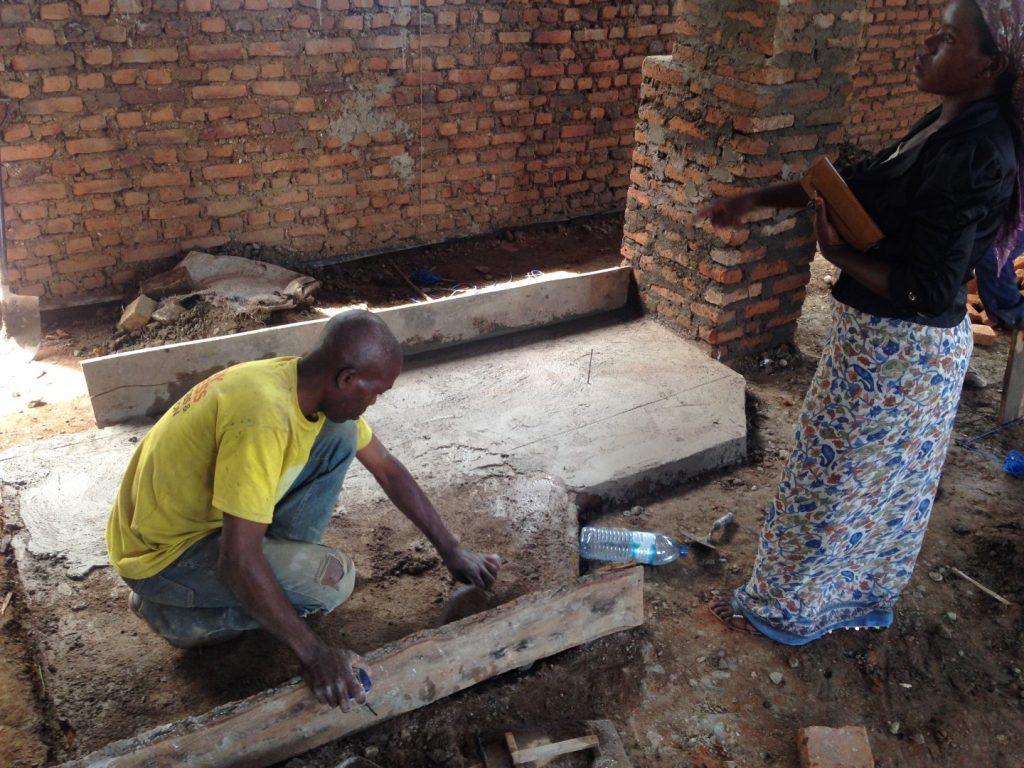 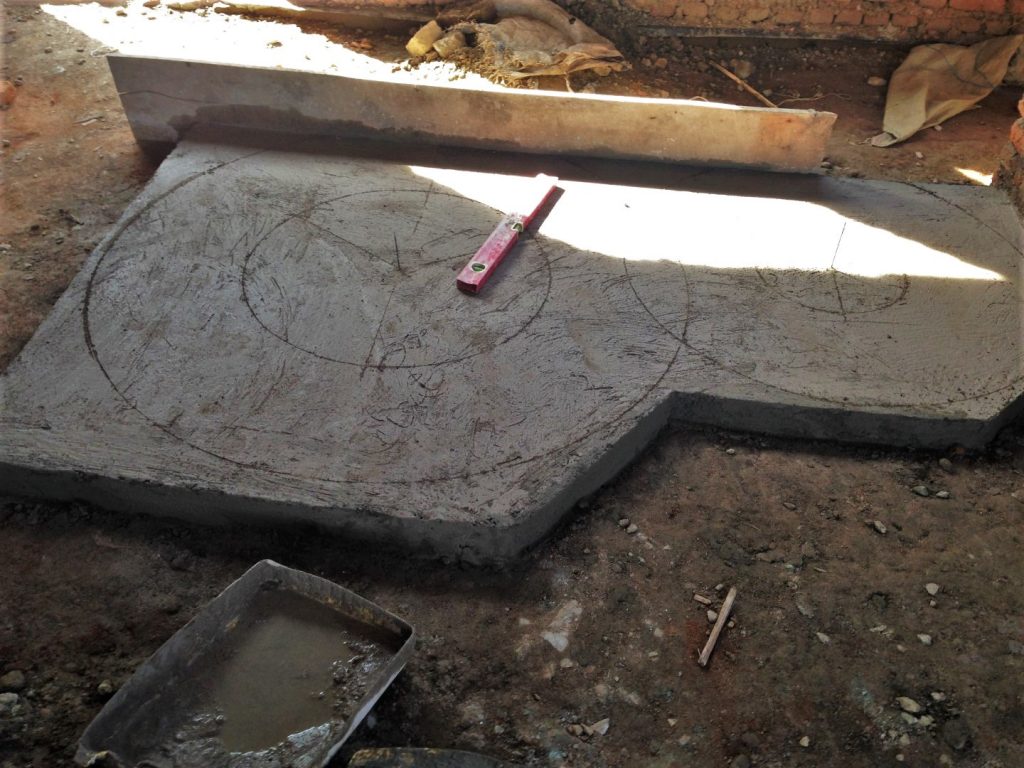 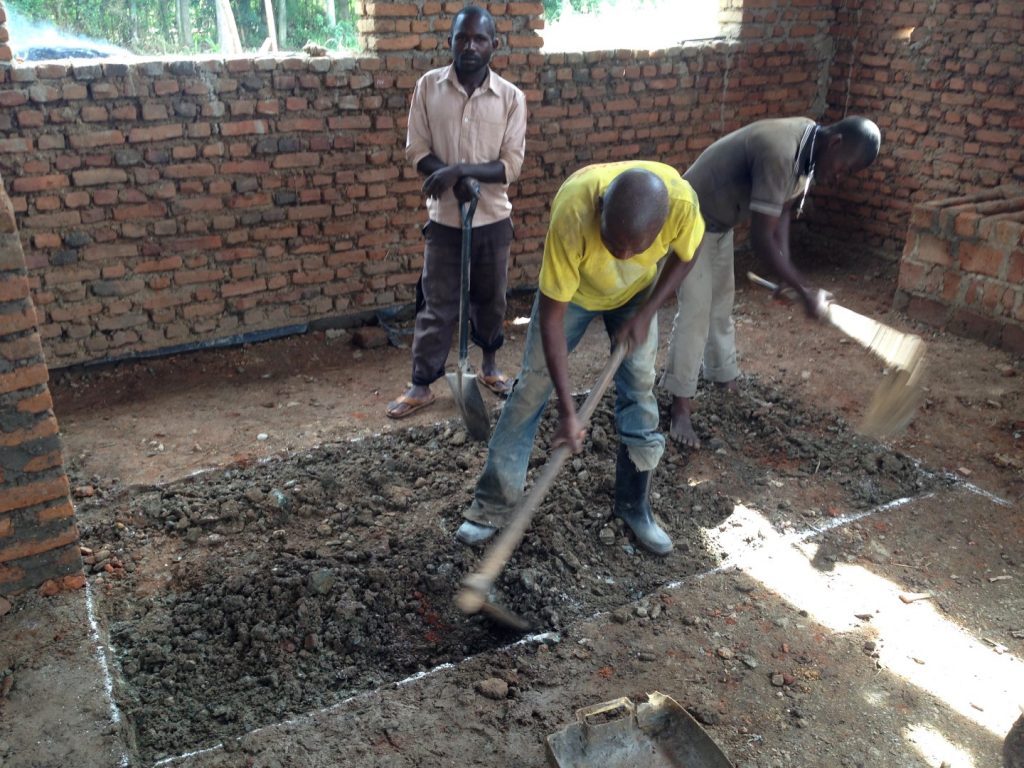 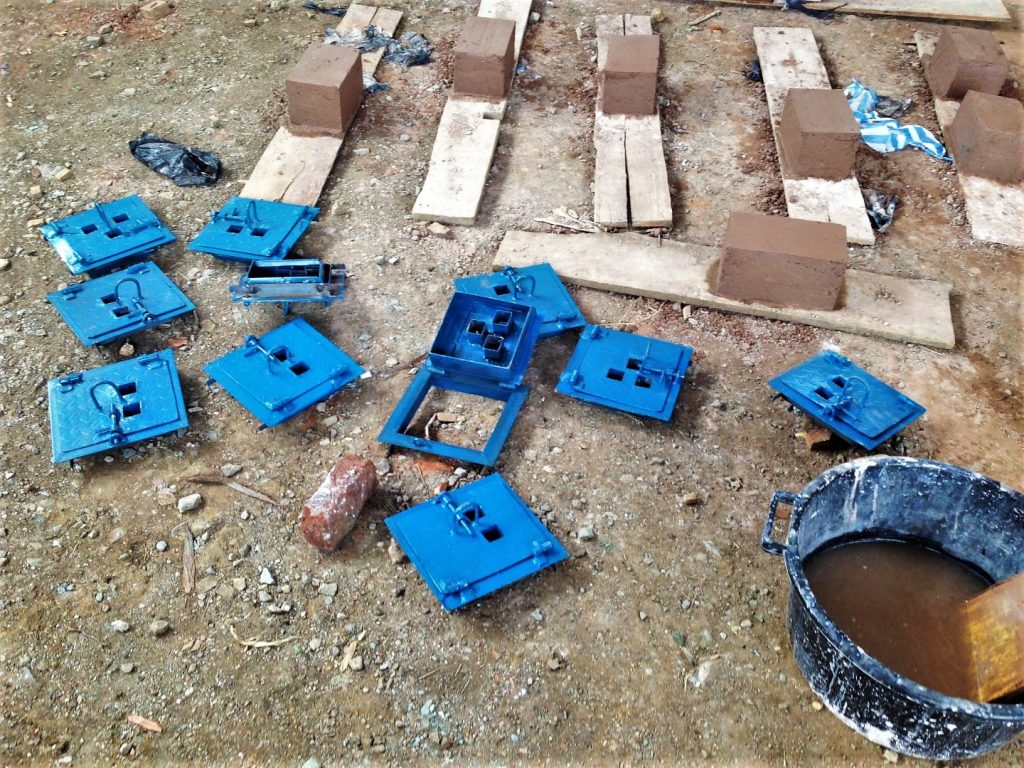 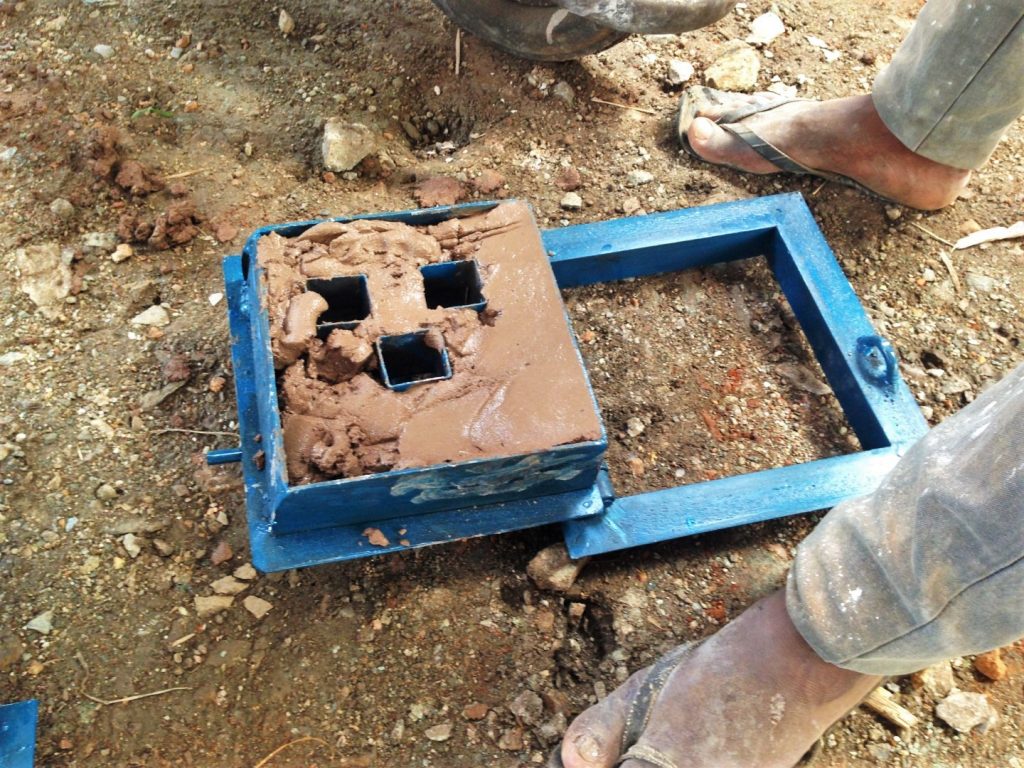 Doors are filled with fireproof cement 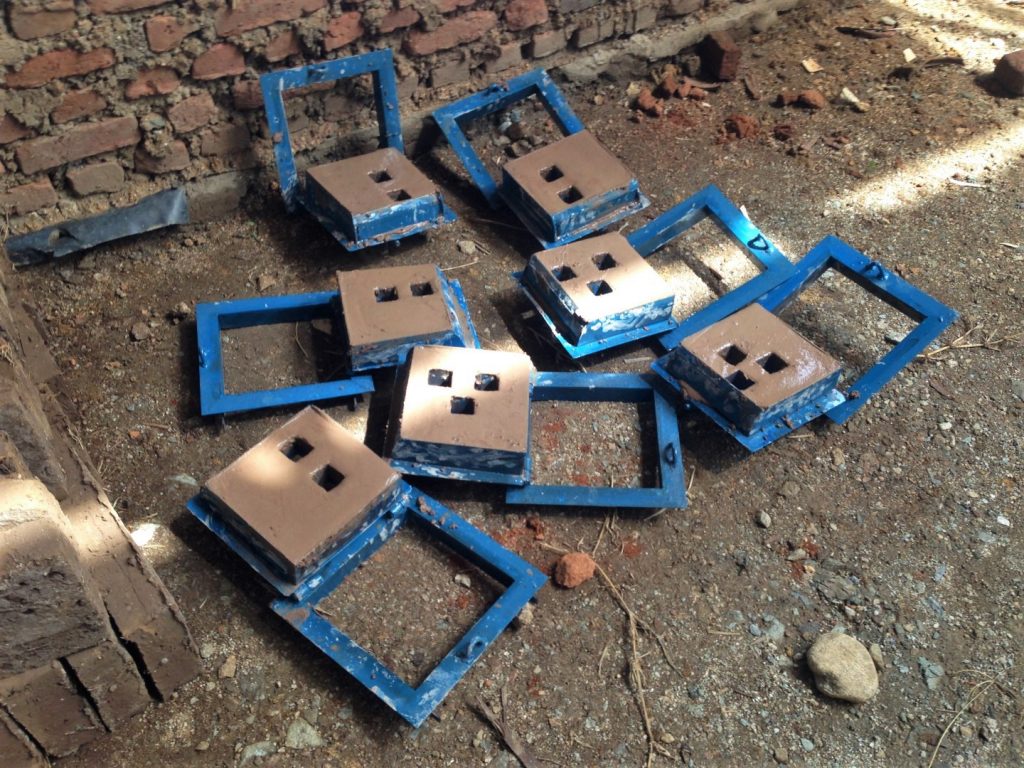 Filled doors ready for the seminar